Get fresh music recommendations delivered to your inbox every Friday.
We've updated our Terms of Use. You can review the changes here.

Whisper of a Shadow - Opus 1 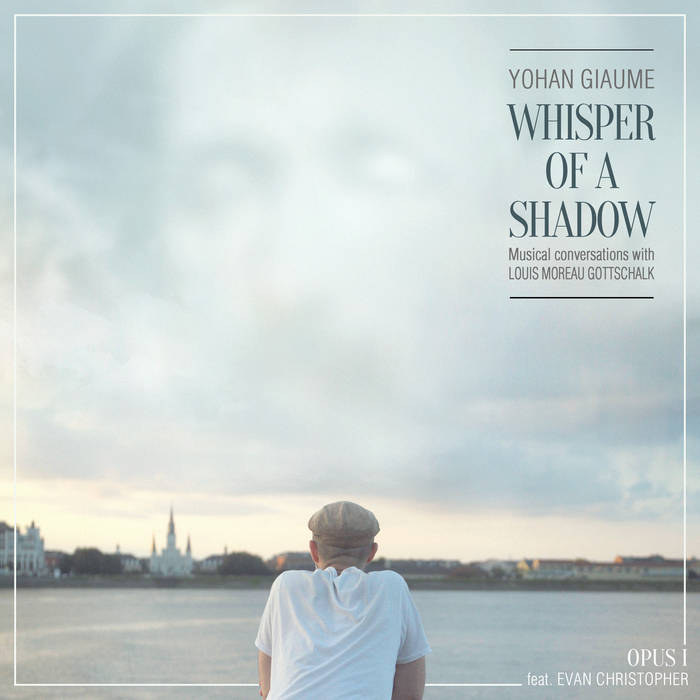 Whisper of a Shadow Opus 1 is the first in a series of albums that follows the musical creative exploration of French composer and trumpeter Yohan Giaume tracing the musical lineage between Europe, Africa and America. Through the 19th century lens of Louisiana romantic composer Louis Moreau Gottschalk’s journey, the album is a result of an imagined conversation between two composers – Gottschalk, a Louisiana native of creole descent and the album’s conceptualist, Yohan Giaume – representing two different eras and two different cultures, New Orleans and France.

In the first opus of Whisper of a Shadow, due out February 12 Giaume pays homage to New Orleans and is distinctly African American culture and weaves a multi-genre musical travelogue encapsulated throughout the album’s operatic arias, Afro-Creole melodies, gospel tempos, spoken word romantic poetry, Congo Square’s rhythms, a funeral march and more. The 11 tracks represent Giaume’s first album as a bandleader with original compositions and arrangements which seek to interact with Gottschalk’s sources of inspiration re-imagined in a contemporary fashion.

Giaume collaborates with renowned musicians from both sides of the Atlantic with an emphasis on New Orleans based artist, Evan Christopher (who also co-directed with Yohan the compositional interpretations). Amongst the 22 artists on the project are: drummer Herlin Riley, trumpeter Nicholas Payton, bassist Roland Guerin, pianist Aaron Diehl, a French string quartet, poet Chuck Perkins, an array of Caribbean percussionists and singers, as well as Louisiana based trombonists and tubists.

The origins of Whisper of a Shadow were conceived 15 years ago when Giaume began to immerse himself in different foreign cultures mainly guided by his love for the music of the African diaspora. He explored Cuba, Argentina, Uruguay, Peru, Morocco, Europe and different places throughout the United States. He started spending as much time as possible outside his native country after his academic studies and immersed himself in different musical traditions, to be connected to the ancestor heritage and understand what is hidden behind the notes.

Giaume explains, “By exploring these cultures from inside, traveling back and forth to different countries seeking the roots of the music, I started to discover pieces of the puzzle of the musical family tree and the links that interconnect the various cultures. Music is like a tree, everything is connected, every musical line or rhythm you play is the shadow of something that came from somewhere and it is fascinating to me to see how cultural heritage continues to exist after centuries of geographical transformations. It shows how music is powerful, essential in a society, and how vital it is to have continuum from the past to present time.”

Giaume began in Cuba and South America, but it was New Orleans that left him rapt. “I had a strong feeling of recognizing a part of myself in that culture and city.” He also made an unexpected discovery during his journeys to the Crescent City: Louis Moreau Gottschalk, the Louisiana romantic Creole composer and pianist, had taken almost the same route in his travels as Giaume did two centuries apart. During Gottschalk’s time, he was one of the first, if not the first, American composer to inspirationally embrace Afro-Creole music. Gottschalk was heavily inspired by Afro-creole folk songs that his Haitian nanny sang to him when he was child.

Giaume discovered a song that Gottschalk never used in his compositions, although it was very familiar to him, he reimagined it as his own arrangement, sublimated by Christopher’s interpretation. In New Orleans the melody of “Lisette Quitté la Plaine,” once a very popular tune, was labeled as an Afro-creole song, but in his research Giaume discovered that the melody was originally part of the melodic repertoire used in operettas vaudevilles in France during the 18th century and the lyrics were a creole parody of Jean-Jacques Rousseau’s opera “Le Devin du Village.” In his composition “Lez African E La” Giaume was inspired as well by another old afro-creole folk melody "Quan Patate La Cuite" that Gottschalk used for his famous piece named "Bamboula". In this track, Yohan pays a special homage to the enslaved that gathered on Sunday afternoon in Congo Square at Gottschalk’s era.

Another example of Giaume’s compositional process is what he did with the melody of Gottschalk’s piece titled “Morte!! (She is dead).” “One of my most powerful experiences was to attend Snooks Eaglin’s funeral in the streets of New Orleans. It is the first time I saw a funeral that celebrates a life and life, in general, with such beauty,” explains Giaume. “I was moved by the emotional strength and grace of this experience where the procession is accompanied by a riveting and soulful music. Gottschalk’s melodic lamentation sounds like a hymn and it moved me by its grace and its simplicity. That melody walked with me and infused the whole development of my composition called "Life Circle" inspired by the jazz funeral procession."

Bandcamp Daily  your guide to the world of Bandcamp